“I went to Calais believing that someone there would want to paint and if I could find that one person then I would be useful. What I found was a need to make art on a scale that I’d never encountered before.” – Suzanne Partridge.

People often say to me “I can’t even draw a stick figure” and I usually challenge them to prove it. The artist who painted this great work was indeed a fine man. He was probably about 50 years old although he looked 65 as the Jungle had a way of adding decades to people.

I noticed that there was no over layering of colour on the boards. The first line painted was good enough and it was joined by a second and a third line. Each line seemed to be largely unquestioned. I witnessed the painting taking place and the looks and the smiles that each one created. When each completed painting was presented as finished it was greeted with an irrepressible smile and a handshake from me. Some of the men wanted me to interpret their work so I would describe the painting as I saw it – “A house, the sea and a fishing boat with a man who has caught a fish.” Each time I guessed correctly I was given a rousing “Yes!” from the artist in question. 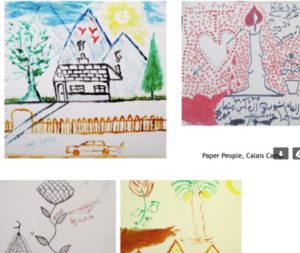 Some men made more than one piece. Some men painted quietly and the lack of language between us made understanding the descriptions of their work difficult but other men helped with translations. Some of the paintings were quick and forthright and others were delicate and took time to complete but all of the work created a connection between people.

I cleaned brushes whilst sitting with a few men as they painted. A man came along and gave me his finished artwork before he began to show me a film on his phone. I shall never forget what I saw or his words as he described what I was seeing. “There were 400 people on the boat.” he said “Some ladies and children too, but they were underneath.” (below deck) He told me that the young men I could see smiling in the film as they ate from small bowls of rice were his brother and his cousins. The smiles were there in the film but they were a thin veil masking a much greater trepidation. He went on to tell me “We were on the boat for 8 days. 2 of those days with no food or water.” I noticed that there was no shelter. I could see the bright blue sky and the sea and a mass of people crammed on deck and I could only imagine the ladies and the children locked below standing in 8 days worth of human effluence. As I was watching the film men came to show me their finished paintings and I talked with them about their work but I always came back to watching the film. When the film was finished I asked if the man’s brothers and cousins were with him in the camp, but he said they were not. I left a silence and a space for the next question but he didn’t offer any more information and so I didn’t ask where his cousins and his brothers were. A short while after this another man who had been painting brought me a cup of hot, milky, sweet tea that tasted like condensed milk and I thanked him immensely. He looked seriously at me and said “You have earned it.” 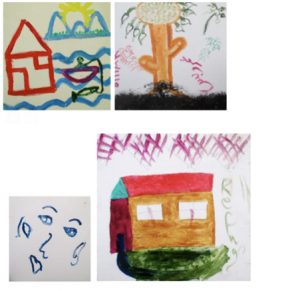 A group of men arrived and a young boy amongst them was being noisier and acting tougher than he needed to. I thought he was about 12 years old. He was not smiling because he was acting like a man. I liked him immediately. When he saw that one of his bigger brothers had started to paint the boy asked me for a board so that he could paint too. His brother finished and bought his painting over to me – it was Arabic script and he told me that it said “Allah”. I thanked him and I shook his hand. He placed his painting upright on top of a stack of other completed paintings and using gestures he told me that it must stay that way up. I was on my knees arranging and photographing completed artworks before the young boy handed me a painting which was also Arabic script. I said “What does the painting say?” He lifted his face and stretched his palms up to the heavens and projected a heartfelt phrase that I have often heard spoken on one of my favourite albums of all time. (Terry Hall and Mushtaq – The Hour of Two Lights – 2003) The boys beautiful young voice sounded the same as the record. I was totally taken aback and I implored him to say it again. He raised his arms and his face to the heavens and he said it again before he looked down and smiled at me. I shook his hand and he held mine and I asked him to say it again – he did so and he smiled. His brother came over and he said “It means same as Hallelujah.” I looked at the boy in wonder. We were still holding hands. He was smiling down at me and I was smiling up at him and at the same time our eyes welled up and threatened to spill over into tears – but still holding hands and looking at each other we managed to smile and blink them away without any body else seeing.

(Play is another painting by the same boy.) 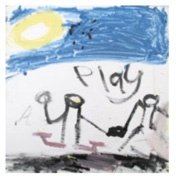 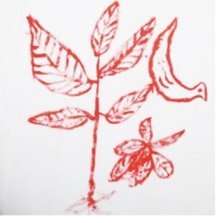 Yakob made the final painting of the day. He handed me the work and I didn’t know which way around it was meant to be seen. With the painting facing him I turned it on its side but he made no response, so I turned it the other way around and he smiled and nodded. The bird in the picture was at an angle. We didn’t share each others spoken language but from his seated position using his body, his arms, his eyes and his smile, Yakob motioned that it was a bird about to take off. We shook hands and as we looked into each others eyes we really saw each other. I wanted him to be able to fly too.

As Paris was subjected to horrific events on the evening of Friday 13th November 2015, a fire raged through the Jungle. 250 people lost their shelters. Men who had just lost everything they owned and had nowhere to live didn’t want to paint. But they moved themselves closer and closer to the men who were painting – so close in fact that I could reach over and hand them some paper, some paints and a brush. They took them reluctantly but with a smile and a laugh. Some of the men shared what their painted images represented. (There was a great story about egg collecting but unfortunately that image isn’t shown here.)  We were joined by some more men and two Sudanese ladies who were making sure everyone was OK. One of the ladies took a piece of paper and drew a bird. I showed her how the watercolour pencils turned to paint when you added water, but I had to show here twice before she acknowledged my presence. After a while she gave me her completed drawing. I thanked her very much. She smiled at me before she left. I got the feeling she was “Momma”. 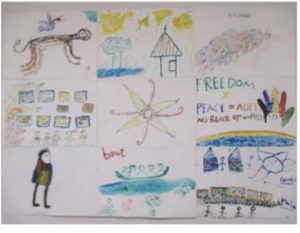 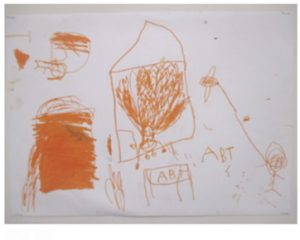 The stencil designs were chosen, drawn and cut by individual men. I had offered no guide lines or theme but they all drew flora and fauna. To spray the stencils under the motorway bridge where the riot police gathered hadn’t been a plan until Willy the french graffiti artist turned up. I asked him if he would help us spray the designs under the bridge and he said “ Yes of course – Bring the ladders, I am short !! ”  As I walked with refugees carrying ladders they joked with their friends that they were learning to be British. Lots of people joined us to spray paint the wall under the bridge. I think of the work as beautiful birds trapped in the Jungle. People living in the Jungle said it was a nice message. At night the florescent paint glowed in the flashing blue lights of the riot police vans.

We are the chaos that keeps creating.